As a Canadian expat living in Spain Thanksgiving doesn't entail much of a celebration. Although Spain appoints a holiday to every saint under the sun (anything for an extra festivo), Spain has no holiday like Thanksgiving. Furthermore, apart from Spain's lack of the holiday, American expats (Canadians are few and far between) celebrate it on a different date. And so, for those reasons the 8th of October was unfortunately turkey-less for me.

As an Auxiliar de Conversacion I am tasked with not only exposing Spanish students to a native accent but also with acting as a cultural ambassador. In other words, me and my Canadian/Quebecois/Hudsonite upbringing is often young Spaniards' first experience with the Canadian culture... a lot to shoulder. At any rate, last year, and again this year, I was asked to introduce Thanksgiving to the students at my high school. I have to admit, this was a learning experience of my own... I had no idea why the holidays were on two different dates or how the holiday differed, in terms of historical background, from the U.S. to Canada.

I prepared a lesson plan that included a slideshow detailing the holiday's historical background for each the U.S. and Canada,  as well as today's traditions. I finished the lesson doing the classic 'draw a turkey by tracing your hand' activity. It was fun to compare the holiday with the American Auxiliares at my school and the lesson made it so that the day didn't go by without recognition, even though all it really did was make me drool over the slide detailing the tradition of turkey dinner...

Some interesting facts I learned about Thanksgiving:
1. Thanksgiving was actually celebrated in Canada 42 years earlier than in the U.S. (Martin Frobisher gave thanks for his crossing in 1578, the Plymouth pilgrims only landed in 1620)
2. The reason for the different dates in today's Thanksgiving celebrations is merely the climate. Since the holiday celebrates harvest, it all depends on when the gathering takes place; winter comes earlier in Canada and so does harvest.

When explaining today's traditions I mentioned that many big cities in the U.S. hold parades and I showed them a brief clip of the Macy's Thanksgiving parade in New York City. The clip showed a variety of floats, including a giant Shrek balloon, a Dora the Explorer balloon, Jimmy Fallon's float, Buzz Lightyear, Spongebob, etc. I was asked an interesting question, why those particular characters portrayed in the parade? Suffice to say, I could not answer... 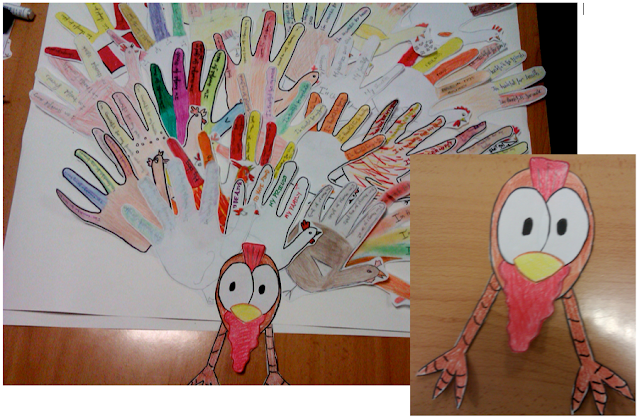 Posted by Hannah Kennell at 2:36 AM